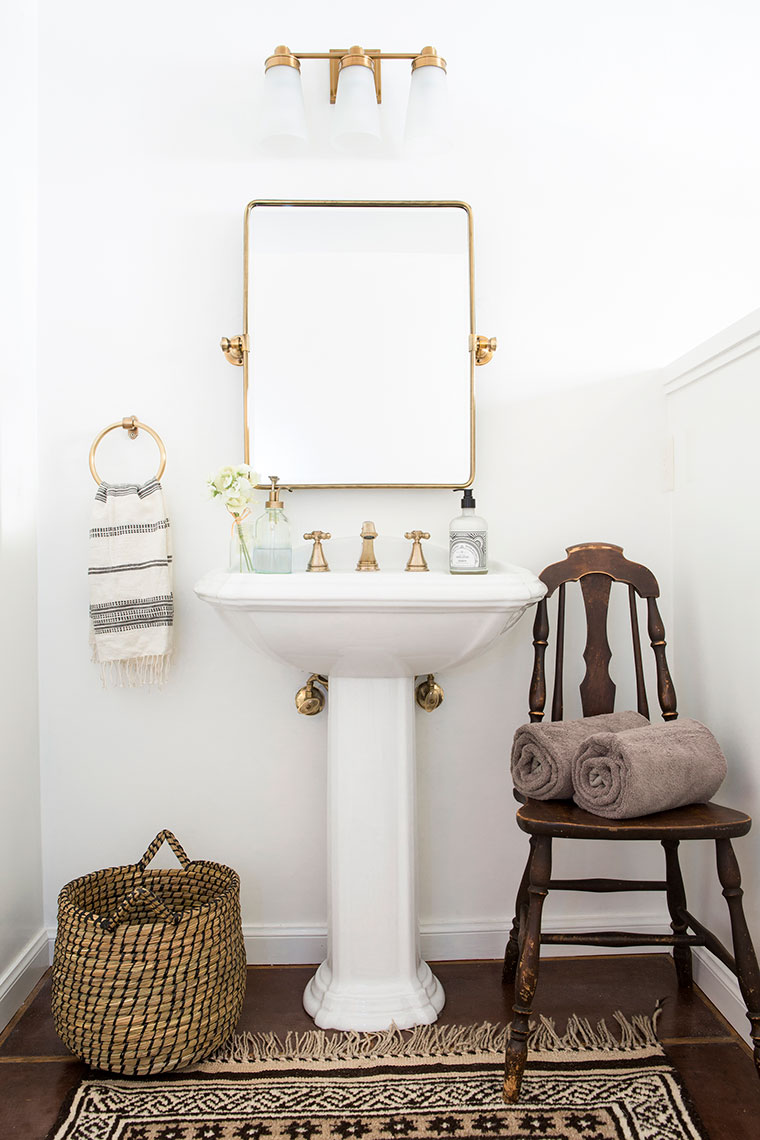 This is a sponsored conversation written by me on behalf of Delta Brand. The opinions and text are all mine.

So let’s take a little trip downstairs shall we? I really haven’t showed you guys much of the downstairs yet, I know. It’s similar to the bowels of the ship, if you catch my drift. The laundry room is down there, as well as a man cave and play room area. As you can imagine, it’s pretty attractive. That dog will have its day, don’t worry. But for today, let me show you our downstairs bathroom.

It’s about twice the size of the upstairs bathroom and gets probably a third of the use. I think the reason for that was that it really used to remind me of a dungeon. It’s basement level, so there’s already not a huge amount of light, but combined with the super dark stained concrete floor AND the green and burgundy walls? Well it wasn’t really a winning combo, check out the before pictures at the bottom of the post.

END_OF_DOCUMENT_TOKEN_TO_BE_REPLACED 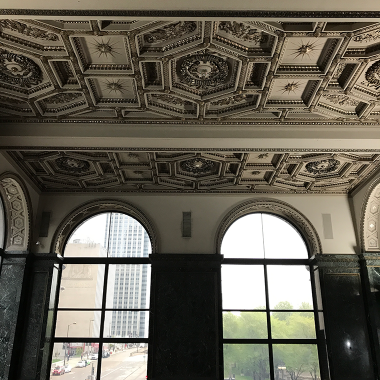 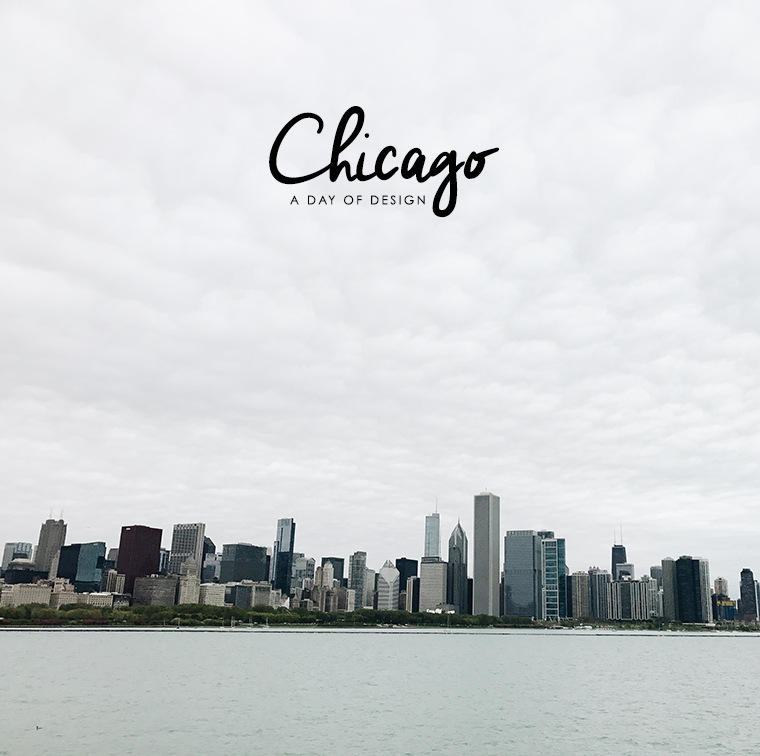 A couple of weeks ago I took a little trip to Chicago. Most of you probably followed along on my Instagram. The reason? A Day of Design with Delta and John and Sherry from Young House Love. Such a great concept, right? The plan? An architectural tour around Chicago to gather up inspiration for a design board we were to create using Delta and She She products. I love me some good inspiration AND a good design challenge! Sign me up.

END_OF_DOCUMENT_TOKEN_TO_BE_REPLACED

If you follow along on my Instagram account, you’ll probably already know that I took a quick trip to Indianapolis a couple of weeks ago. The trip was for an annual event held by Delta® faucet where they invite a small number of bloggers to visit their headquarters and learn everything there is to know about Delta and their higher-end, fashion based design, sister line Brizo. I’ve been fielding a lot of questions lately about kitchen faucets; more specifically the pros and cons of touch and touchless faucets. So I was pretty excited to learn more about them. AND it was all expenses paid, which is always a win-win in my book 😉

The first thing I learned was that the people of Delta truly care about their company, their customers their products and their employees. Everyone I met was passionate and so knowledgeable about their brand and products. It was inspiring to be in such a environment.

As a company Delta is always thinking about their customer. The take the design of their products very seriously. And what I didn’t know? Not only are Delta’s products beautiful, but there is SO much thought about how the products work and perform that they really are functionally beautiful as well. I was pretty impressed with that factor, because before? Before, in my mind, a faucet was a faucet and all one-touch and touchless faucets performed pretty much the same. Not so, my friend, not so.

While at Delta headquarters we got to explore and compare several other comparable featured faucets: the Kohler Sensate™ Touchless Kitchen Faucet, Grohe Minta Touch Kitchen Faucet, Moen Arbor MotionSense Kitchen Faucet and a Delta Trinsic Faucet with Touch2O®. In my humble opinion, the Delta faucet performed the best. 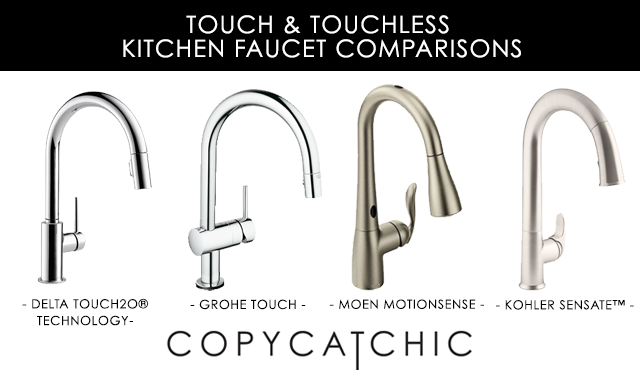 – DELTA’S TRINSIC FAUCET WITH TOUCH2O® TECHNOLOGY –
Makes it possible for anyone to turn on or off the faucet by touching anywhere on the spout or handle of the faucet. Delta was the first company to create a touch faucet and they have a patent on their touch technology. That means that no other faucet company can use the same technology, therefore they have to create work around. Bottom line? They just don’t work as well, even the touchless ones. The Delta faucet knows to turn on/off depending on the length of your touch. Therefore if you’re moving the faucet around it won’t turn on or off unless you want it to. The touch sensor is very responsive and I found I only had to touch it once to respond. The Grohe wasn’t as reliable. Delta’s faucet is powered by batteries and they’ll soon be releasing an electric option as well. Delta made sure that their faucets function like a normal faucet first, so there won’t be any confusion on how to turn the faucet on and off when guests use it. Another fun fact? Delta’s faucets turn off after a certain period of unuse, so if your toddler or pet turns it on, it won’t stay on for long.
$433


– GROHE minta TOUCH –
Was the closest comparison with Delta’s  Touch2O® Technology. They’ve developed a touch faucet as well, but the response time after touching was super slow and kind of clumsy. Also you can only use the cold water when using the touch on/off feature. The Grohe touch can also be confusing to people who aren’t familiar with the touch on/off. For example if you turn the faucet on using touch it disables the handle, so you won’t be able to use the handle to turn it off (!!). Which would be super confusing to most anyone, right?
$358

– MOEN ARBOR WITH MOTIONSENSE –
The Moen has two touchless sensors on the top of the faucet, so you can wave your hand over the top and on the inside of the faucet near the handle. Drawbacks? The faucet can turn on accidentally when you’re working near the sink, just by moving your arms near it. I also noticed that the sensor on the top of the faucet was not very responsive, sometimes you’d have to wave your hand over the faucet several times for it to turn on or off. The sensor on top also got confused when you went to move the handle of the sink by sometimes turning on or off when you didn’t need it to. Also if you’re using the handsfree mode, you can’t adjust the temperature of the water using the handle(s), you have change the temperature using a preset gauge on the control box under the sink. Not too convenient.
$495


– KOHLER SENSATE™ TOUCHLESS –
The Kohler faucet has a touchless sensor on the inside neck at the top of the faucet. Therefore you have to  wave your hand up to the inside of the faucet. Kind of awkward and at one point I accidentally got my sleeve wet trying to wave my hand in the right position under the spout to turn it off. Not fun. Also the placement of the sensor affects the design of the faucet. AKA since the sensor is pretty thick, you won’t ever be able to get a thinner and  more streamlined looking spout. The Kohler faucet has to be hardwired, which is pretty inconvenient for those with no access to electrical under the sink.
$600

Okay, whew, that was a lot of text. Hopefully you found it as interesting as I did when learning about these faucets 🙂 Now onto the giveaway! As you know, Delta is always exploring new product ideas to make our lives easier when using them. One of Delta’s latest award-winning innovations is their Temp2O™ Technology. It hasn’t even been released to the public yet! Coming soon, Delta’s showerheads and hand-held showers will feature Temp2O™, which shows you the exact temperature of your water. The LED-lighted screen will either light up blue (<80), magenta (80-110) or red (110+) and will display the actual temperature reading as well. So cool right? I know this will come in handy with a baby in the house!

Delta has generously offered to give one lucky winner either a Temp2O™ shower head or a Temp2O™ handheld shower (your choice). You can enter to win using the rafflecopter widget below! Good luck! 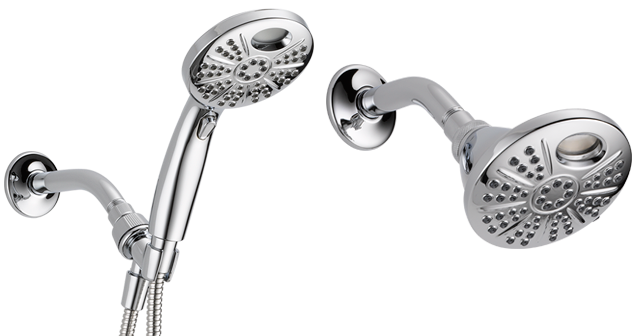 To see a reference of all of our looks for less, please follow my
Copy Cat Chic Find Pinterest board located here.
This post may contain affiliate links. Thank you for supporting Copy Cat Chic.